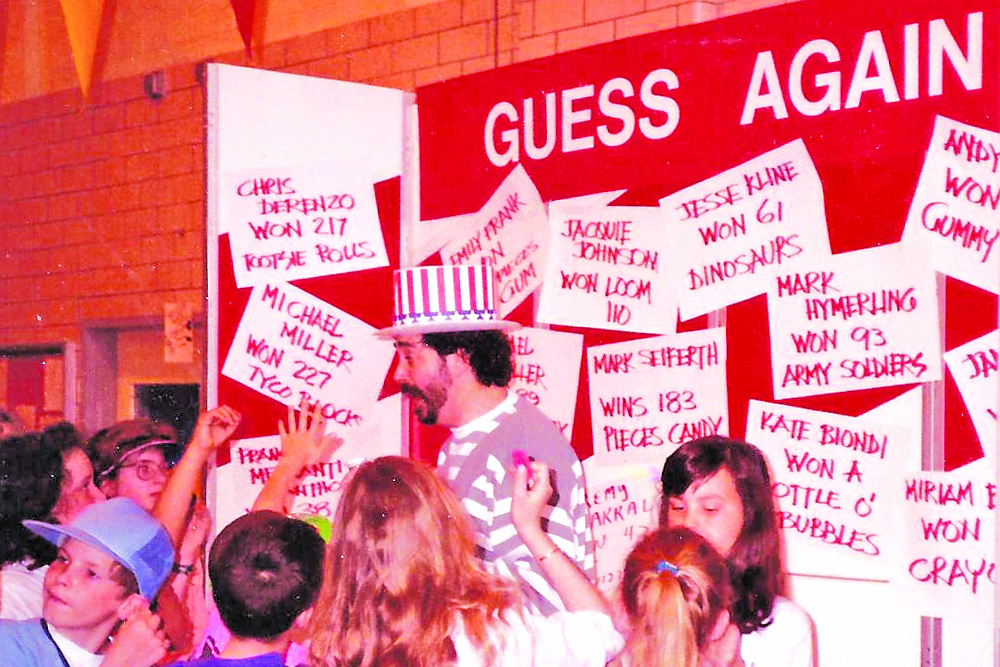 If at first you don’t succeed … guess again.

In the mid-1980s, my wife and I volunteered to run a booth at the Tatem School Fair. We called it “Guess Again!” and it was based on my memory of fairs at my elementary school – fêtes, we called them – thirty-odd years before.

A parent would put a piece of string in a glass jar, tighten the lid, and stroll around the school grounds offering a big prize to anyone who guessed the length of the string. My friends and I lined up to pay our money and guess. If we failed, we went to the end of the line to try again. And again. When we decided we’d spent enough on that losing proposition, we moved on, to the parent with a glass jar filled with beans.

I don’t remember who won any of the big prizes – if, in fact, anybody did – but I do remember that it was a lot of fun. And I remember being impressed by how confident my friends and I were that we would win on our next guess, despite repeated failures.

In preparing for “Guess Again!”

at the Tatem Fair, my wife and I saved

up empty juice bottles for months, and entreated our neighbors to do the same. By the day of the fair we had about 50 bottles filled with loose candy, marbles, sticks of gum, barrettes, toy soldiers, plastic dinosaurs, and the like.

Kids stood in line to pony up a quarter for three guesses. At each incorrect guess, we would say, encouragingly, “Good try! Guess again!” And, with supreme confidence, the children would – until they ran out of money.

Occasionally, a contestant would hit the number. Everyone would

cheer and we’d make a big fuss. We’d write the winner’s name on a card and staple it to the backboard for all the world to see. By the end of the day all of the prizes had been won, and “Guess Again!” had made a lot of money for the fair.

The experience of running “Guess Again!” and of being a contestant at my own school’s fêtes gave me insight into the addictive nature of games of skill and chance. Who among us does not believe, with a lucky penny poised over a brand new scratch-off, that we have a winning ticket? (After all, “Someone’s got to win.”) And who among us, even though our most recent ticket was a “non-winner,” is not willing to try again?

Which brings us to The Election.

To help cut the tension a bit, we’re inviting readers to participate in our “2020 Presidential Election Guess the Vote and Win a Chance to Win One Million Dollars!” contest. Simply guess the total number of votes that will be cast by Haddonfield registered voters for the two main candidates:

For this election, Haddonfield has 10,718 registered voters.

The big prize? A New Jersey Lottery “$1,000,000 Riches” ticket. But since your chance of winning a million is about one in a bazillion, we’ll add a $100 gift card to Denim BYOB, in Downtown Haddonfield.

Deadline: Tuesday, November 3, at 8pm. (Sorry, but you don’t get to guess again.)

RECENT HISTORY: For the 2016 Presidential Election, Haddonfield’s official numbers were:

Fine Print: One entry per person age 18 or older. The winner will be the entrant who guesses the closest to the Total, without going over. The tie-breaker will be the number of votes (closest, without going over) for the winning candidate and then, if necessary, the losing candidate. The numbers used to determine the winner will be those posted on the Camden County website, after the dust settles, under “Precinct Canvass By District.”